The issues in the battle between Beirut’s iconic Saint-George Hotel and the giant development corporation Solidere are complex. But the root cause is simple: The virtual ‘gifting’ by Lebanon’s late prime minister Rafiq Hariri of Beirut’s historic city centre to Solidere – a company in which the Hariri family and key business associates are major shareholders. Having driven out all former property owners, Solidere now owns the whole of Downtown Beirut: its buildings, roads, services, security, cafes, hotels, office blocks, pavements, parks, and even Beirut’s municipality, with ONE exception: the Saint-George Hotel. Its owner refuses to give in and is leading a campaign to STOP SOLIDERE. Legal Analysis

Before you would be overlooking the sea directly.

Today you are looking at a wall.

The wall is 8.5 meters high, the plans showed 3.5 meters only. The laws allows 6 meters max, the Beirut Harbor is about 4 meters. The view is completely obstructed even from the Historical Terrace. The wall is an island 100 meters wide, 450 meters long, 45000 sqm.

You see an Electricity Generating plant producing noxious fumes. The plant is built on public property illegally. A double wall was built against our wall to stop our access to the road.

Behind the illegal ugly building a lagoon was landfilled. The Lagoon was obliterated. 125 meters advance into the sea by 2 kilometers, 250 000 sqm, 7.5 Billion Dollars, 11 Billion Dollars in all. 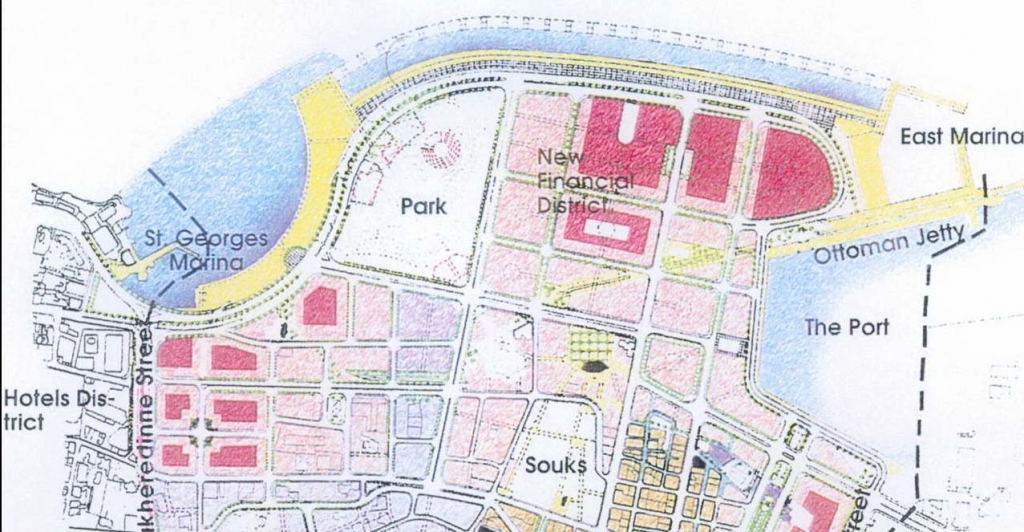 All of the walk way was pushed into the sea Illegally It was supposed to be built against the main land inside the Laguna.
Another Marina is under contract, since 15 years. It is to be built on the east side of the landfil. It has been landfilled.
A car park was decreed for the triangular plot opposite HSBC. A contract was signed with the Government. Instead a Garden was built for private Interest ILLEGALLY.
Also on this Triangle a road was built illegally to replace the road that takes you to Ashrafieh & the Airport. The main road is being used as a carpark for private interest Illegaly.
The walk way from Saint George to the port of Beirut was blocked. A wall was built Illegaly for the ugly building to use public property. Who protects public property? Is that corruption?